Due to imperfect spectral matching of the three channels to the color matching functions (CMF) measurement errors occure, which rise with incrising spectral difference between calibration source and test source. It is possible to profile tristimulus instruments (both spot and video photometers) using spectroradiometers to give more precise results measuring RGB light sources. This is done with matrix methods and based on the fact, that the color of such sources is produced by a superposition of the three primaries (RGB). An easy procedure is described in [1]. A better approach is shown in [2]. The correction matrix is determined by the three primaries and their mixture (white). Furthermore this procedure is independent from possible variations of the luminance. The measuring results of the target and reference instrument for the primaries can be shown as follows:

The k factors are relative factors for the measured luminance of each display color.
Due to the additivity of the tristimulus values and the measured white coordinates one can write

The same relation is valid for the white measurement with the reference instrument. All k values can be obtained from

and the similar equation for the reference instrument. Now the correction matrix R is calculated by

Afterwards the chromaticity coordinate is computed from M′. 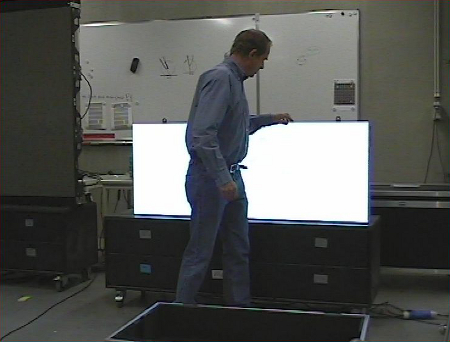